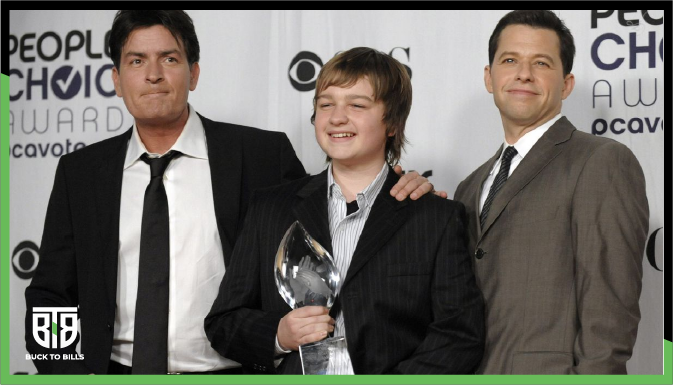 Amazing facts about "Two And A Half Men" TV Series.

The show Two and a half men were first aired on the American televisions on 22 September 2003 starring Charlie Sheen (Charlie Harper), Jon Cryer ( Alan Harper), and Angus T. Jones (Jake Harper). It was one of the most loved comical sitcoms which stood as the fourth-highest revenue-generating program with $3.25million per episode with 12 successful engaging seasons.

No doubt that Two and a Half Men is one of the most loved comical sitcoms with 12 successful seasons. It was first aired on 22 September 2003 with Charlie Sheen (Charlie Harper), Jon Cryer (Alan Harper), and Angus T. Jones (Jake Harper) and led to fourth-highest revenue-generating program in 2012 with $3.25million per episode

Continuity:
Jon Cryer who played the role of a single dad as Alan Harper holds a unique record of appearing in all episodes of the show. He is the only actor who has made his appearances in every single episode of the show spanning 12 years.

Stitches on the chin:
The most famous character Charlie Sheen who played Charlie Harper had a scar on his chin. It is reportedly the mark left by the stitches which he had acquired by an accidental explosion in 1987 in the filming of No man’s Land.

Sheen vs. The Show:
There were rumors that Sheen would be terminating his contract with the show as he would be entering drug rehabilitation. It was even reported on People’s magazine that Sheen would be leaving the show on April 1, 2010, and it was also reported that he rejected the offer of $1million per episode offered by CBS. Putting an end to all the speculations he declared that he would be returning to the show following various reports of him signing the contract for two more years with $1.78 million per episode.

Money making superlative:
According to Forbes magazine reports at a time between 2010 and 2011, Charlie Sheen has become the highest-paid actor with earnings of $40 million. A similar news item has done rounds regarding Angus to making him the highest-paid child actor of the TV with a $500,000 bonus in addition to $300,000 per episode.