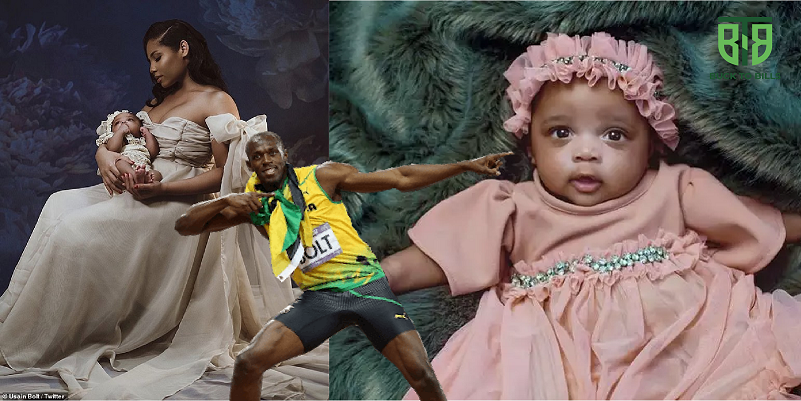 Yes! He is considered the greatest sprinter of all times... Bolt's performance on the track brings joy to millions of his fans all over the globe. Yet, he shares another matter of happiness when he revealed the name of his newborn daughter-- 'Olympia Lightning Bolt'

Wow! Bolt has indeed shared the photos of his first bundle of joy. Although born in May, the ace Olympian posted the photos this month in connection with his girlfriend Kasi's birthday.

Along with a touching caption written by him reads as follows, " Now we have started a new chapter together with our daughter Olympian Lightning Bolt. I look forward to what the future will bring for us but be reassured that I will be the Rock for this family"

Heartwarming, right? Bolt, it has touched all our hearts. Probably unconventional, yet the name 'Olympia Lightning Bolt' justifies the eight-time Olympic gold medalist heroics on the track. Olympia denoting 'Mountain of the Gods' and Lightning, yup, needs no special mention. You know, what Lightning means here. It all blends well, no?

It was the Jamaican Prime Minister Andrew Holness who initially broke the happy news in May, further confirmed now by Usain Bolt in his Instagram account. Bolt's girlfriend Kasi Bennet was seen attired in a ballgown cradling her baby. Another photo depicts the adorable newborn innocently staring at the camera.

I want to wish my gf @kasi.b a happy birthday and To let u know I am happy I get to spend ur special day with u. I want nothing but happiness for u and will continue to doing my best keeping a smile on ur face. Now we have started a new chapter together with our daughter Olympia Lightning Bolt I look forward to what the future will bring for us but be reassured that I will be the ROCK for this family. I Love you and happy 21th birthday 😂😂😂.